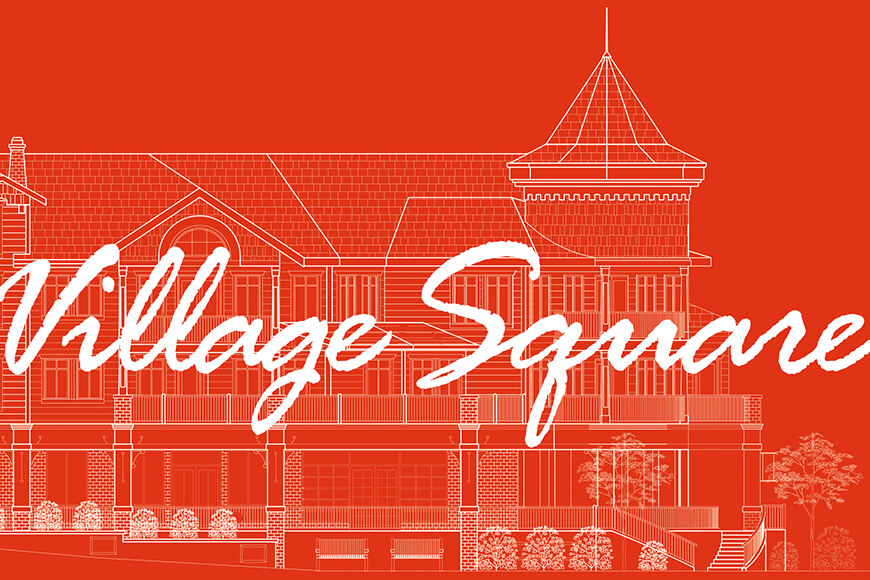 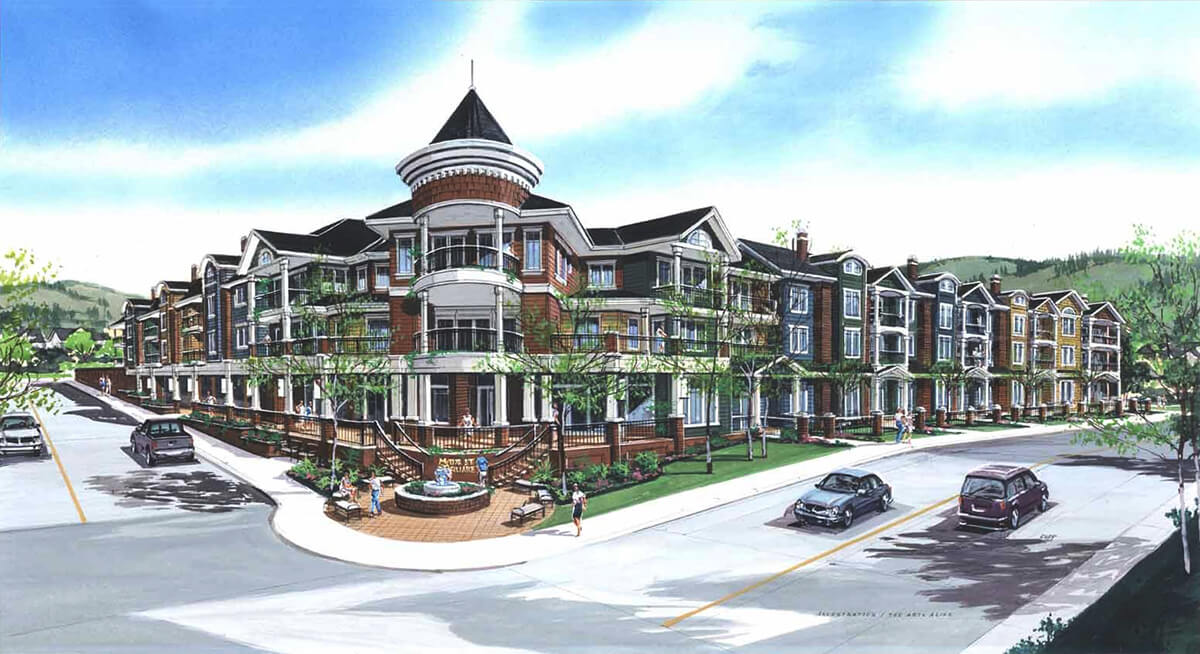 A painted rendering of the project, looking southeast

3D renders of the project

Early on, I seized upon the idea of the hanging signs of old Europe. Another concept was the turret on the mountain overlooking the valley, inspired by the main entrance. While the third was the enclosed courtyard, another feature of the building’s structure.

While we explored all three concepts, the hanging sign was where we ended up with the final version shown. We lost the grape detail in the arm because it was too busy, and we brought up more detail in the stylised version of the building.

The European village concept gave us a different vocabulary to work with than the typical pastel suburban lifestyle we’ve come to associate with real estate development. We used only touches of colour or muted colour in our photos, and a spare typographic style. And once we used that Italian red, the pieces really started to stand out from the crowd.

Our copywriter came up with the tag Harvest the flavours of village life at Kettle Valley, and that was the last piece we needed to create the brand.

Kettle Valley is on the south side of Kelowna, and the Village Square construction site was set in the centre of the neighbourhood. The Discovery Centre was across the street to the north in the row of shops.

The space was long and narrow and not well lit. There was an old carpet sunk into the floor, and there was a portable curved wall at the back we could use if we wanted to. 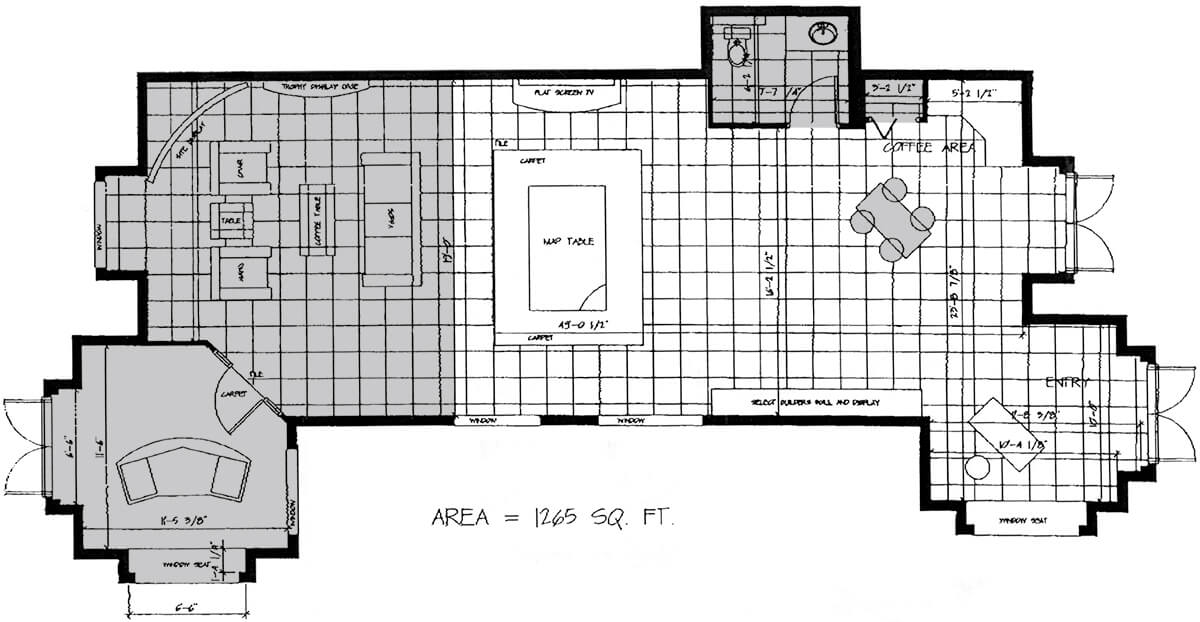 Once we had the plans from the building owner, we combined it with our measuring and worked out our layout. Good thing, too. Some of the plan’s measurements were off. I would primarily concern myself with the presentation up front – on the right here, while the interior decorator would work their magic with the show suite and the sales office – the grey areas. 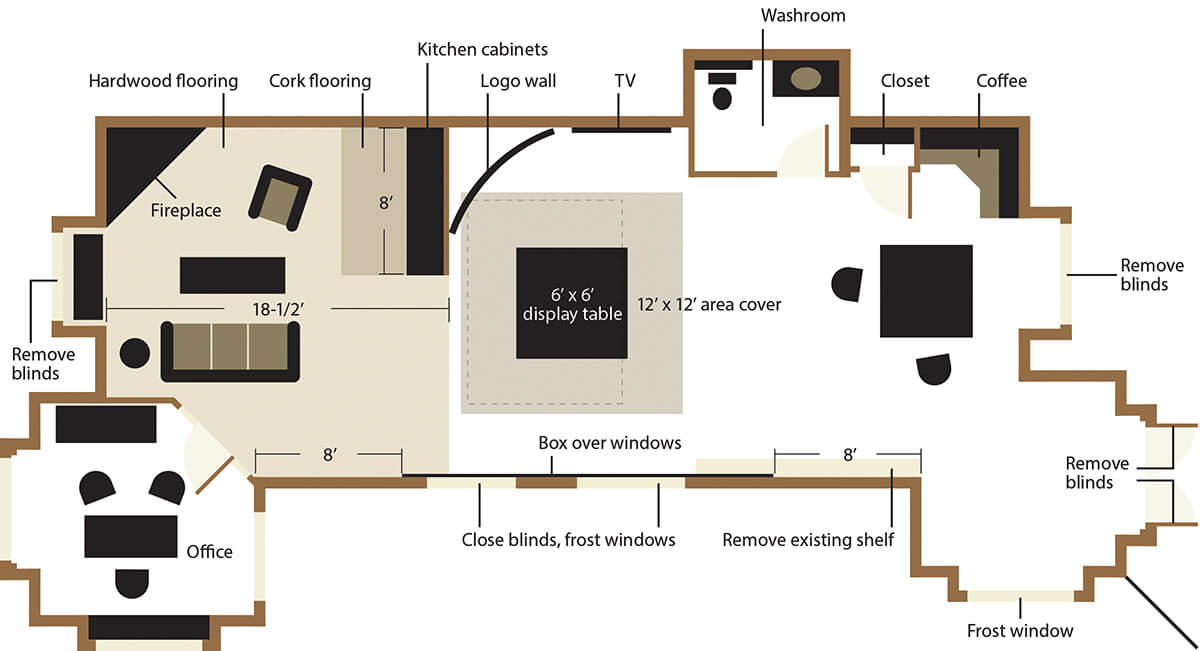 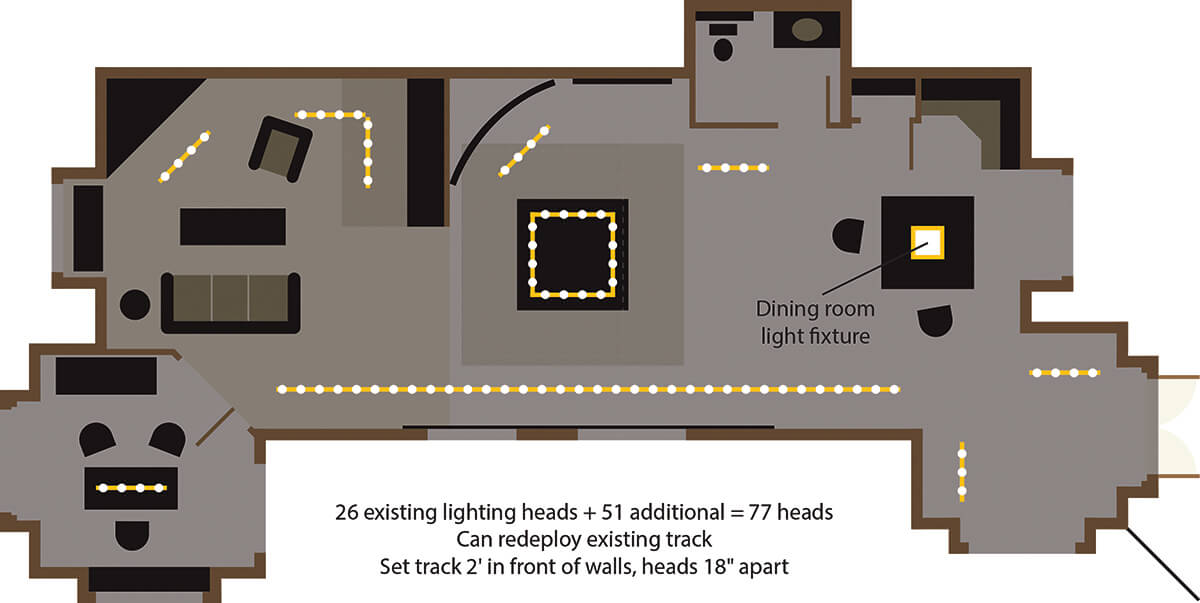 The back of the show suite kitchen created a division of space that the visitor could feel going from the presentation area to the show suite. The transition worked quite well, breaking up the long awkward space. 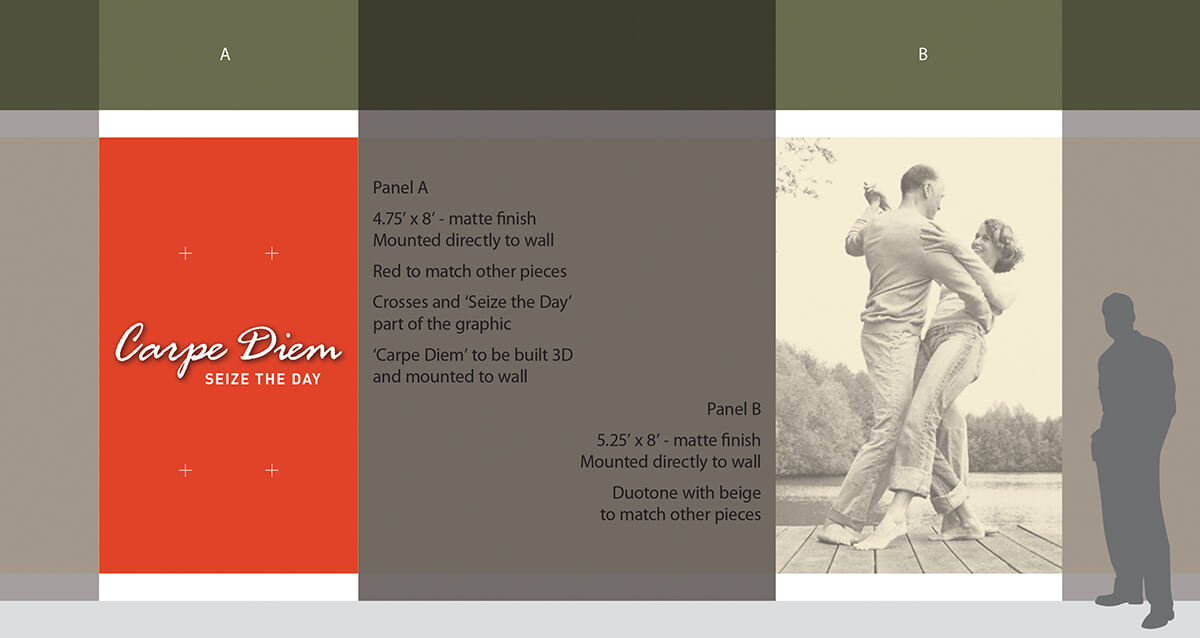 These walls framed the foyer and were a nice entrance into the presentation area. The red wall was a burst of energy, while the pastel dancing couple was the soft kiss after.

The E wall was where we did most of our storytelling 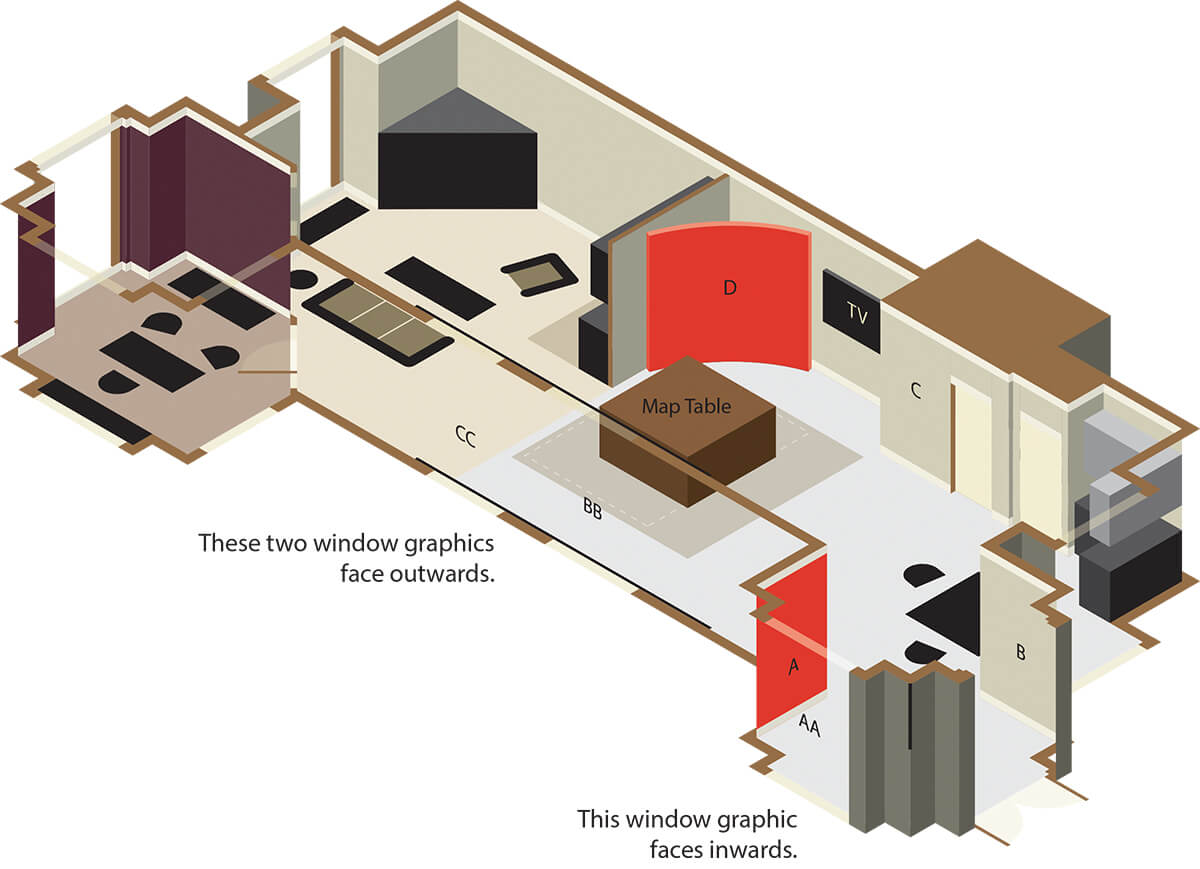 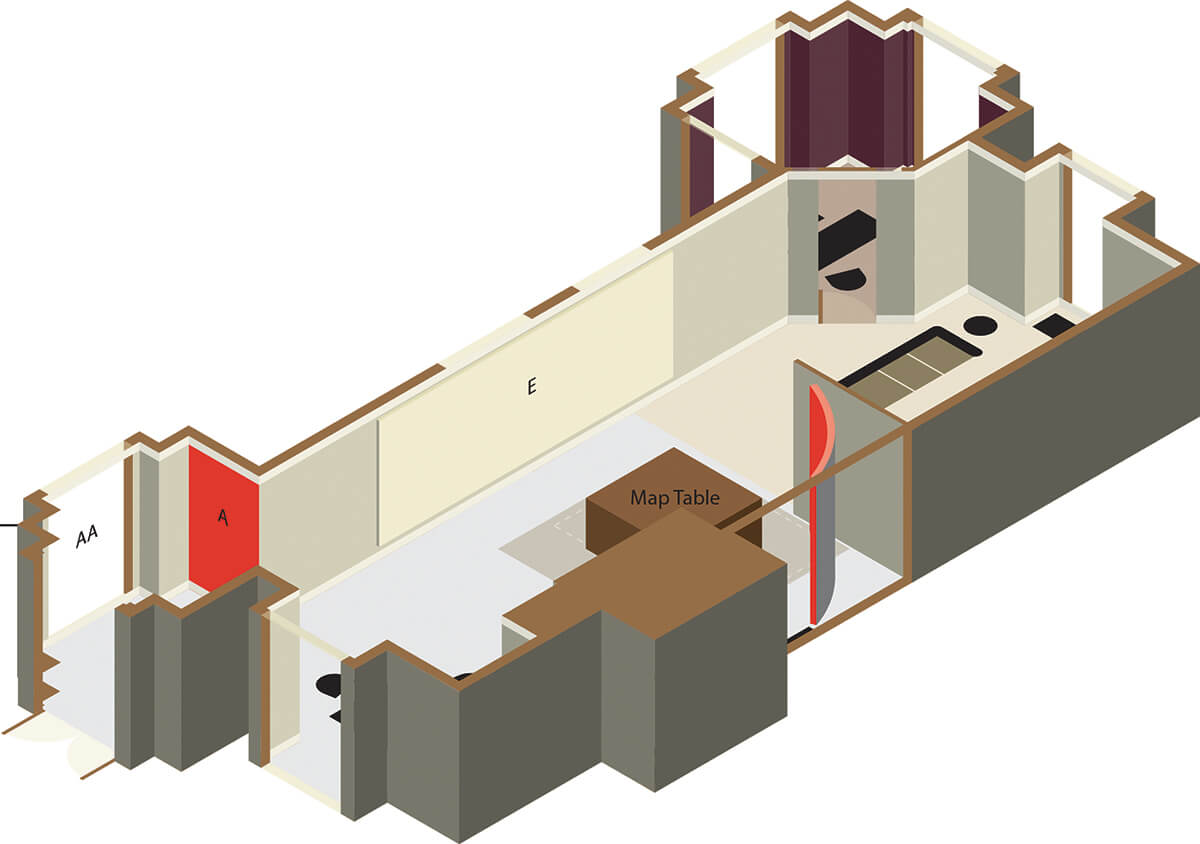 The map table was custom, based on these sketches I supplied to the cabinet maker

Site signage: lamp standard vinyl-coated fabric hangers, a metal hanging sign for the outside of the Discovery Centre, and a large wood sign with a dimensional logo in its face on the proposed construction site

Window AA in the foyer had frosted mylar applied to it, as did BB and CC. With the latter two boxed in behind the E wall, we painted the back of the wall red. 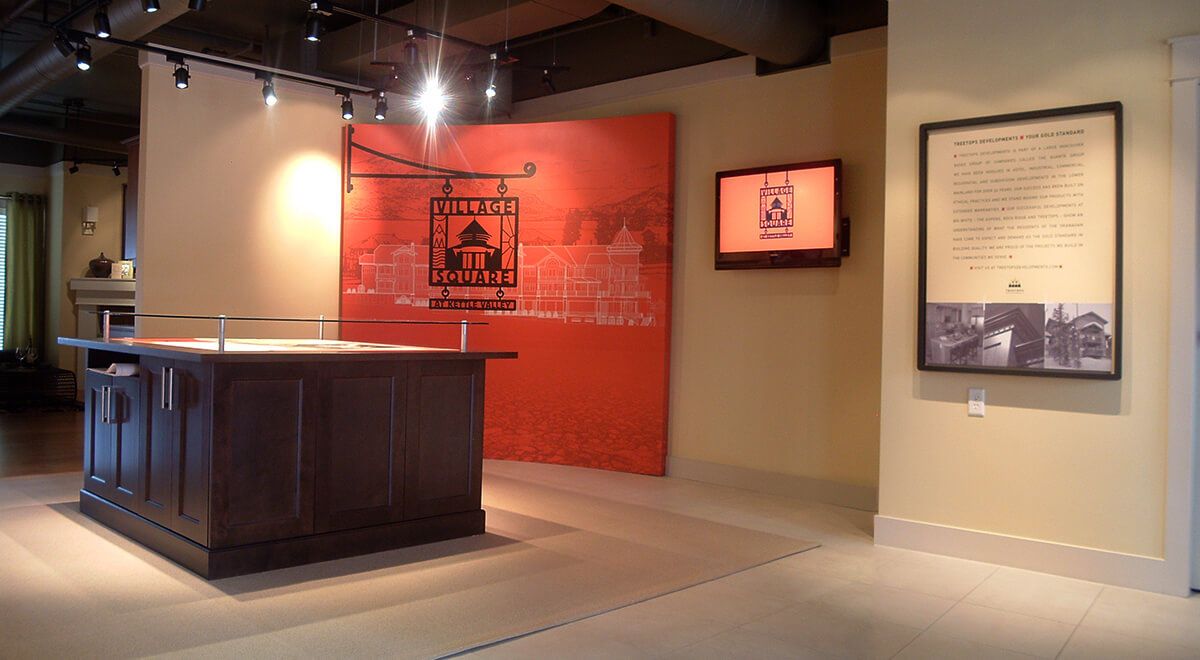 The hardcover book of brochure material and floor plans was prepared especially for the Discovery Centre and featured the logo laser printed onto an aluminum badge which was set into an opening in the fabric-wrapped cover. The softcover version was handed out to potential buyers as the A-Kit. While the hardcover had Chicago screws binding it, the softcover had paper fasteners with faux screw heads.

The rack card started out as a square, and unfolded to a… bigger square 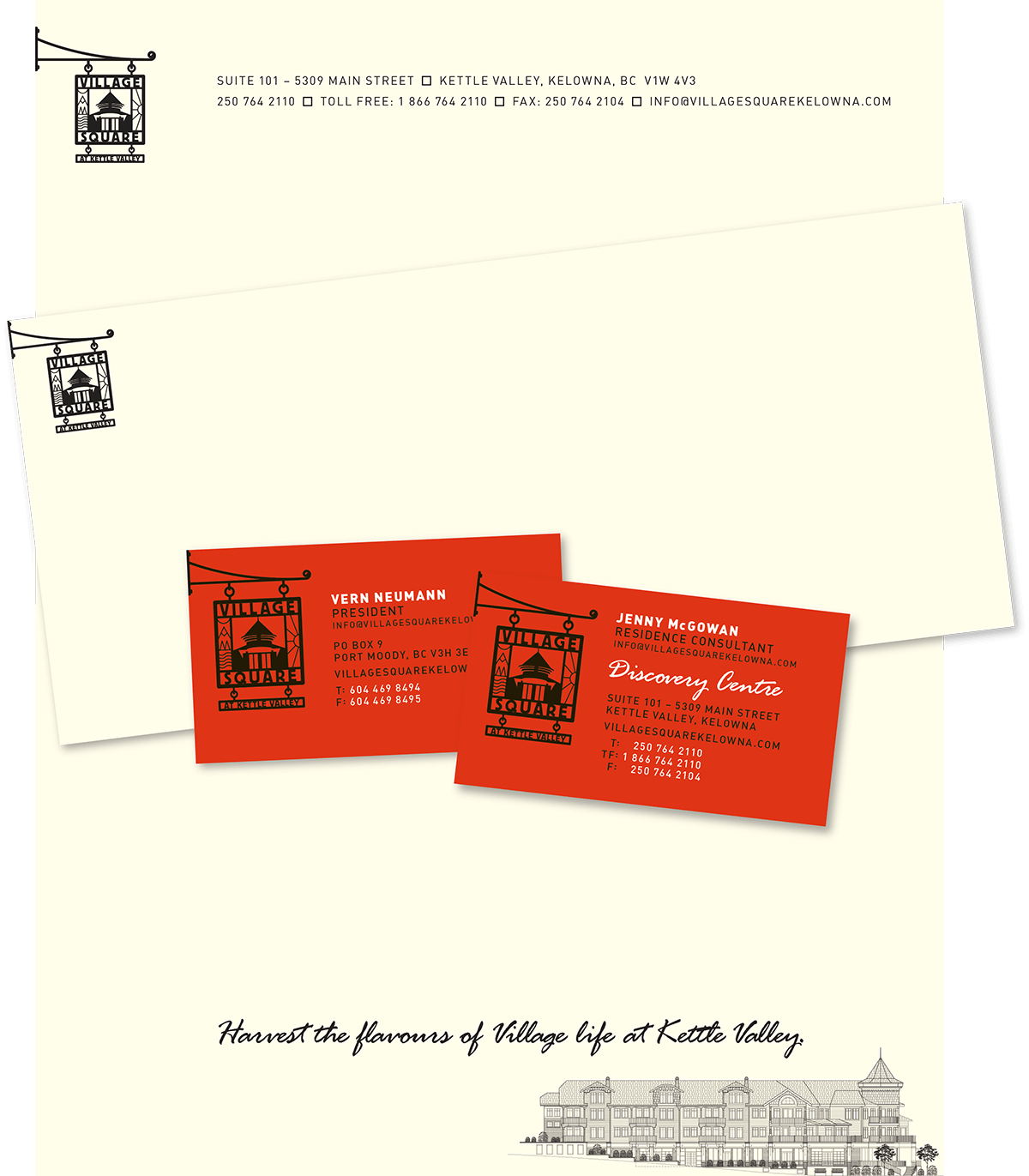 A developer’s latest project was to be the first condominium complex in the heart Kettle Valley, a Cape Cod-styled community on the south side of Kelowna, BC.

From the naming development document:

“Our objective is to name and position the Kettle Valley Project as contemporary, modern country condo living with a European village atmosphere. We want to establish a sense of play, joie de vivre, a connectedness with the community and seasons of Kelowna.”

I took the supplied name Village Square and direction to not be merely a copy of the existing marketing for Kettle Valley (a product of another developer/agency).